Galvanizing produces a zinc coating on the steel surface and is one of the most effective methods for corrosion protection of steel. This is attributed to the excellent corrosion resistance of zinc coatings, particularly in atmospheric environments. Galvanized steel is the most important application of zinc. Worldwide, the use of zinc for galvanizing results in an annual consumption of more than three million tons of zinc, constituting nearly one-half of the world zinc production [1]. 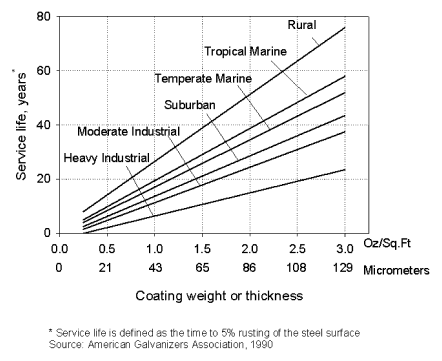 Corrosion rates for zinc, like other metals can vary by as much as two orders of magnitude in atmospheric environments depending on the specific environmental conditions. Therefore, it is important to know the specific corrosion rate in a given application environment in order to effectively use zinc coated steels in outdoor structures.

The most commonly used method, for corrosion life estimation of galvanized steels has been the use of generalized values (see Figure 1) for the different types of atmospheres [2]. However, although simple and convenient to use, this non-specific approach is no longer adequate to meet the demands of the market place. Today, designers and specifiers of galvanized steel increasingly ask information or performance certainty. Also, as products are becoming more application-specific, more relevant information on corrosion rates is required, generating the need for more accurate prediction methods.

Numerous investigations have indicated that corrosion rates are strongly affected by certain factors, such as time of wetness, sulfur dioxide and chloride concentrations in the air. These findings form the basis for corrosion rate and lifetime prediction. Historically, there have been a number of methods developed to predict the life of galvanized steels in atmospheric environments. Each of these approaches is described briefly in the following.

While these models generally provide some useful correlation between corrosion rates and the factors for the data used in the regression analysis, a large uncertainty may be generated when they are used for prediction in environments which are not included in the regression analysis. This is mainly due to the fact that regression models use predetermined functions for a few factors, in a generally additive and linear fashion, while the real function for the effect of all the significant factors is essentially unknown. In addition, the data used in the development of the regression models are generally limited to a small number of atmospheres so that each model is limited in its applicability to of the diversity of atmospheric environments in the world.

The prediction models used in the current Zinc Coating Life Predictor were developed using neural network technology together with statistic methods. A commercial neural network software, NearoShell® 2, was used for the development of the predictions models [12].