Atmospheric corrosion refers to the corrosive action that occurs on the surface of a metal in an atmospheric environment. It occurs when the surface is wet by moisture formed due to rain, fog and condensation. Atmospheric corrosion is a complex process involving a large number of interacting and constantly varying factors, such as weather conditions, air pollutants, material conditions, etc. The combined effect of these factors results in a great variations in corrosion rates. 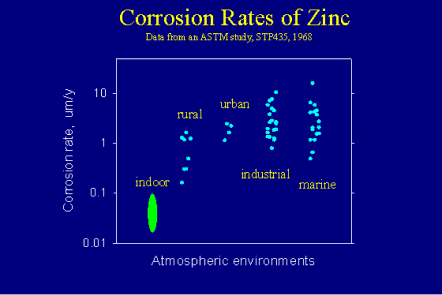 Most of the factors influencing the atmospheric corrosion of metals are not controllable and only some of them can be monitored with reasonable accuracy, consistency and cost. In addition, depending on the specific geographic setting and application conditions, the microscopic environment, which actually determines the corrosion rate, may significantly differ from the macroscopic environment characteristic of the geographic location [1]. Furthermore, as weather changes with time from year to year, the corrosion rate also tends to vary. It is thus not possible in general to accurately predict corrosion rates in atmospheric environments.

Coating life is the total time required for the zinc coating to decrease to zero thickness due to corrosion. The model does not consider the variation in the composition and thickness of the Zn-Fe alloys layers which may consist of significant portion of the batched galvanizing coatings. Coating life measured in years, is estimated from the zinc coating thickness and the corrosion rate calculated by the prediction model.

Coating Thickness is the thickness of the zinc coating on the steel substrate. Coating thickness can be expressed in terms of weight or actual thickness. The factors for conversion between different units are:

Corrosion Rate, R, is defined as the amount of corrosion loss in thickness per year: R= d/t

Where d is the total amount of thickness lost due to corrosion in micrometers, t, is the number of years during which the loss occurred. The corrosion rate is most commonly expressed in the units of µm/year. It may also be expressed in terms of weight loss such as mg/dm2*day, g/m2, oz/ft2, etc.

The corrosion rate expressed in the above function is a time-averaged rate over at least one year and may differ from rates calculated over short periods. Short-term corrosion rates in any outdoor atmospheric environment tend to greatly fluctuate as environmental conditions vary from day to day and from season to season. Short term data is thus generally less representative of the typical corrosion rate of the environment.

Table 3: Classification of Corrosivity of the Atmosphere

Category C1 involves generally climate-controlled indoor atmospheres in which the corrosion rate is very low while category C5 includes atmospheric environments which are very corrosive to zinc such as by the sea shore or heavily polluted with SO2 or extremely humid conditions. In the ISO Standard, the corrosivity of atmospheres is correlated to three key factors: the time of wetness, t, the sulfur dioxide content, P, and the air-borne salinity, S. Table 3 shows the ISO classification of corrosivity in terms of zinc corrosion rate in relation to these three factors. In addition to these factors, other atmospheric factors may also play significant roles in determining the corrosion rate of zinc such that the corrosion rate can still vary in a certain range for a given combination of the three specified factors.

Relative Humidity, RH, is defined as the ratio of the quantity of water vapor present in the atmosphere to the saturation quantity at a given temperature, and it is expressed as %. RH in open atmosphere greatly fluctuates during the day and from day to day due to climatic changes. RH is an important factor which together with temperature variation, causes moisture condensation on metal surface.

Airborne salinity refers to the content of gaseous and suspended salt in the atmosphere. It is measured by the concentration in the air in units of µg/m3. Since it is the salt that is deposited on the metal surface that affects the corrosion, it is often measured in terms of deposition rate in units of mg/m2/day. The pollution levels can also be measured in terms of the concentration of the dissolved salt in rain water. Although the surface salt deposition rate and the salt concentration in rain water results from the salt content in the air, the direct correlation between these different quantities has not been found. The ISO classification of salinity levels expressed as annual averages for outdoor atmospheres is given in the following table.

Sulfur Dioxide, SO2, is a gaseous pollutant in the atmosphere resulting predominantly from the burning of coal, oil, and gasoline and has been identified as one of the most important air pollutants which contribute to the corrosion of metals. It is usually measured in terms of its concentration in air in units of µg/m3. Since it is the SO2 deposited on the metal surface which affects the corrosion, it is also often measured in terms of deposition rate on the surface in units of mg/m2/day. The pollution levels can also be measured in terms of the concentration of the dissolved SO4 in rain water. Although qualitatively, high SO2 concentration in the air generally results in a large amount of deposition on an exposed surface and a high concentration of dissolved SO4 in rain water, there is not an exact correlation between these different quantities. According to International Standard ISO 9223 [2], the relationship between surface deposition, Pd, and air concentration, Pc could be roughly expressed as: Pd = 0.8 Pc. The ISO classification of pollution by sulphur dioxide for outdoor atmospheres is given in the following table.

Table 1: ISO Classification of SO2 Pollution in Annual Average

The P values are the annual averages calculated from continuous measurements for at least one year. P0 is considered to be the background concentration and P3 is considered to be extreme. In general, high sulfur dioxide deposition rate tends to result in high rate of corrosion. However, for two different geographic locations with similar sulfur dioxide deposition rates corrosion rates may significantly differ because many other factors may also play significant roles.

Temperature, T, is defined as the annual mean air temperature at which the material is exposed and is expressed in °C or °F.

Time is defined as the length of time measured in units of years in which the material is exposed in an atmosphere.

Time of Wetness, TOW, is an estimated parameter based on the length of time when the relative humidity is greater than 80% at a temperature greater than 0°C. It can be expressed as the hours or days per year or the annual percentage of time. Although TOW is used by many researchers as a parameter to correlate corrosion rates with atmospheric factors and although it is used in the ISO Standard, it is not used in this software as an input parameter. It is generally not as readily available as RH and temperature data because it is a secondary quantity derived from values of RH and temperature.